Understanding the health of your workload is an essential component of Operational Excellence. Defining metrics and thresholds, together with appropriate alerts will ensure that issues can be acknowledged and remediated within an appropriate timeframe.

In this section of the lab, you will simulate a performance issue within the API. Using Amazon CloudWatch synthetic, your API will utilize a canary monitor, which continuously checks API response time to detect an issue.

In this example, should the API take longer than 6 seconds to respond, an alert will be created, triggering a notification email.

Actions items in this section:

The following resources had been deployed to perform these actions. 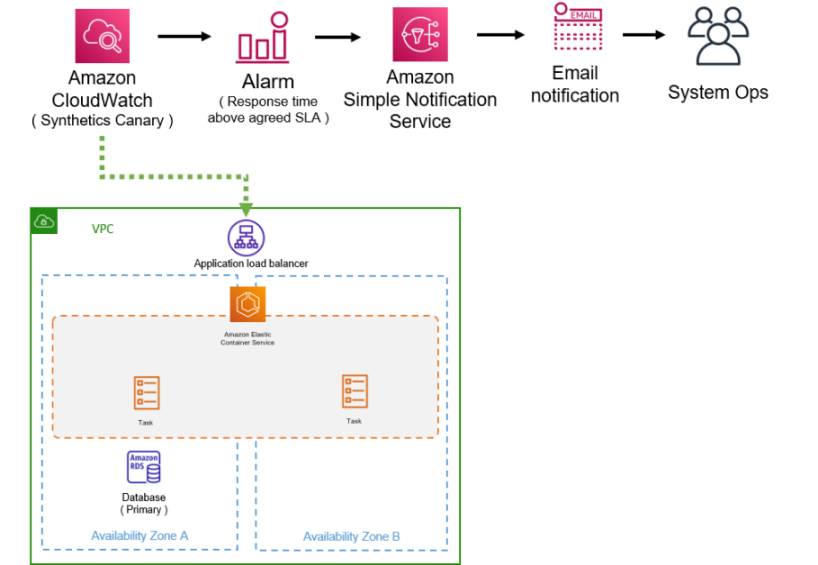 2.0 Sending traffic to the application

In this section, you will send multiple concurrent requests to the application, simulating a large surge of incoming traffic. This will overwhelm the API, which will gradually increase the response time of the application. This results in the canary monitoring exceeding the set threshold, triggering the CloudWatch Alarm to send notification.

2.1 Observing the alarm being triggered.

You have now completed the second section of the lab.

You should still have the simulate_request.sh running in the background, simulating a large influx of traffic to your API. This causes the application to respond slowly and time-out periodically. The CloudWatch Alarm will be triggering and performance issue notifications sent to your System Operator to prompt them into action.

This concludes Section 2 of this lab. Click ‘Next step’ to continue to the next section of the lab where we will build an automated playbook to assist investigation of the issue.